Yes, as announced earlier, the team battle has begun.  A fierce but sweet war is now raging between Team Marshmallow & Team Candy, and there’s no sitting on the sidelines for you, you need to pick your team and play your part. Welcome to The Quest For Supremacy.

How Do I Take Part?

Firstly you need to have reached Week 3 and have triggered Part 1 of the K-Pop Idol Questline.

Whilst taking part is easy, winning is another thing as that depends on you picking the right team.  And when the battle screen pops up in your game you’ll choose between Team Marshmallow or Team Candy. I can’t tell you who to pick, but I’ll say the scores are close and each team has been in front more than once.

So you’ll see the screen below, simply pick your side, literally and hit confirm and that’s it you’ve joined a team. But be aware once you pick a team you can’t later jump ship and change sides, you’re Team Marshmallow or Team Candy to the bitter-sweet end. 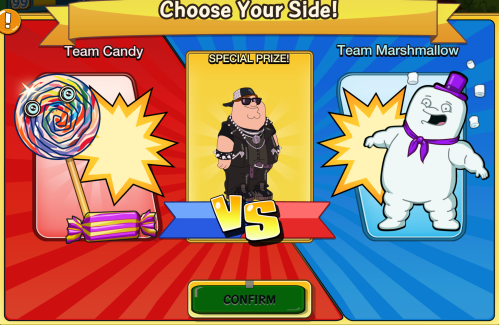 How Do I Help my team?

It’s easy just keep clearing Paparazzi. That’s it, simple as can be.

When does the battle end?

Sunday May 5th at 9PM PST. You’ll see a countdown timer on the tracker screen.

The winning team will get the Bad Boy Peter costume and some clams.

And the gallant losers will get some consolation clams.

HOW DO I TRACK WHO’S WINNING?

Just hit the tracker button at the bottom of screen. It looks like this.

This will bring you the current standings for the teams, and will also In the middle show your contribution to the team, if it’s 0, stop slacking immediately, your team needs you.

Please note as the screen says these update every 15 minutes. So it will change frequently.

What is the Diehard fanbase questline? 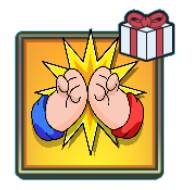 It’s basically a side Questline that will progress as you clear Paparazzi. And there’s a few Clams rewarded for completing parts and if you complete the Questline, you’ll automatically get a Bad Boy Peter.

There you have it, the basics of second battle of  The Quest For Supremacy, so pick your team and may the best Marshmallow, or Candy, win.

27 responses to “The Winter Summer Reunion – Quest For Supremacy”