Tell Jam City what you want!!! Well you asked, they listened – Leveiling up Dinosaurs

A few times a year I put up posts where you can share with Jam City any ideas you have or  suggestions to improve your game experience, I then wave it in front of them and wait…..

And despite this game being almost 6 years old now, Jam City Support are continuing to show they are listening. For a long while now long term players have been asking for a way to continue levelling up the dinosaur characters we got in the Peter’s Prehistoric Park event, characters such as Raptor.

These originally were levelled up by training tasks during the original event, so once the event ended so did our ability to level them up. With the reintroduction of these characters in QHS this issue has been raised again and I’m glad to say Jam City have now transferred the dinosaurs to the standard profile and we can now level them up like any other character. 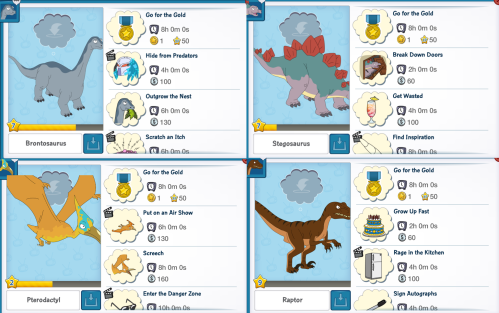 The characters you can now level up are Brontosaurus, Stegosaurus, Pterodactyl and Raptor. At this time only the Go For Gold task earns XP, but that’s the task most of you will be putting them on at this time.

Whether XP is added to other tasks, we’ll need to wait and see. But the fact the team are still listening and acting in our requests is a good omen for our game continuing for a good while yet.  Let me know in the comments if you will be levelling up any Dinosaurs.

17 responses to “Tell Jam City what you want!!! Well you asked, they listened – Leveiling up Dinosaurs”