Just thought I’d put together a little overview of Time Travel Madness to  answer the questions I’m seeing in the comments, and a few I’ve not seen yet but I know will come. So take a peek below to see if I’ve managed answer all your queries, and if there’s anything else you’re wondering just ask me about it in the comments. I’d also be grateful if any players with the beta testing share their feedback in the comments.

Remember this information is based on the beta testing, so the final feature may differ and I’ll cover it once launched for all players.

How will I know if I’m in the beta testing group?

You’ll see the message below if you’re included in the beta testing.

But even if you’ve not got the feature, this will give you an early look at what might be, and you  can also see what other players who have played the beta testing feature think of it in the comments in this post and by clicking HERE and HERE.

What is Time Travel Madness?

This is a new feature that contains lots and lots of things you don’t want, (game coins, XP) but a few you do, (event materials, returning characters/costumes and more importantly some new and exclusive characters such as Hedgehog Stewie, Storm Chasing Joyce Kinney).

As you can see it’s timed, usually running for 7 days alongside a Mini event.

I’m going to be honest this is probably going to be much more premium than freemium, so be prepared to use clams if you want reach the top level reward.

Basically players can earn rewards through Stewie’s Time Machine. You use Uranium to travel through time and collect rewards. The more you travel, the better the rewards will be, but you’ll need luck, clams or both not to lose them to a time paradox!

How Do I get Stewie’s Time Machine?

The Time Machine can be purchased at the store for 12000 coins! After it’s  placed it just acts like an ordinary building with rent paid every 24 hours.

Accessing the Time Machine feature will instead be via the Icon that will appear when the feature is live in your game. It looks like this.

Tap on the Icon to open the Time Machine screen. 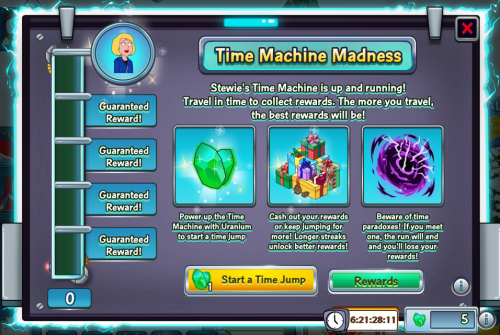 Above is what you’ll see.

At the left you’ll see the rewards you’ve collected, you need to reach 50 to get the top prize, which is a new and exclusive character.

On the bottom right you’ll see how much Uranium you have.

Rewards – Tap this to see all the potential rewards.

Start A Time Jump – obviously this sends you on your time jump.

At the very top left you’ll see the new, exclusive character you can win by making 50 successful time jumps in a row.  For this beta test it is Storm Chaser Joyce Kinney.

Tapping “i” will bring you up the information box, you can see this below.

How do I get Uranium?

Each player will start with 5 free Uranium. You’ll then send characters on tasks to earn more or buy it for $$$.

The characters that drop it have changed with each test, but at this time it appears to be: Joe, Global Warming Ollie, Ark Builder Tom Tucker

How Do I Earn A Reward?

Basically you’ll use 1 Uranium to do a Time Jump.

Just hit “Start A Time Jump”. You’ll then see a new screen in which you choose a portal to visit. 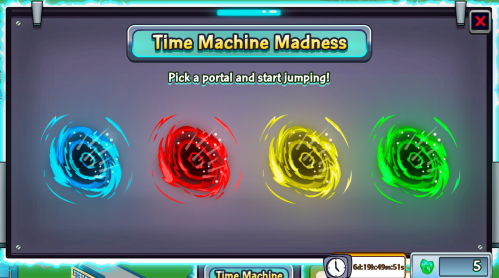 Your award will then be revealed.

It will be placed in the Time Machine, where it will stay until you claim all the prizes earned. You’ll see them in the middle bar, and total in the column on the left. You can take your rewards or keep time jumping.

What are the rewards for a successful Time Jump?

What you get will depend what jump level you are, but every level has a mix of rewards that can include:

Event Currency
Event Materials
Returning Decorations
Game Coins
XP
Medals
Clams
Uranium
Returning characters (including those who were exclusives in previous TTM such as Hedgehog Stewie, or bought for $$$ such as Ape Peter)
Returning costumes
New Exclusive Character (Support have confirmed the beta testing exclusive characters used to date will all appear agin as potential rewards again, so all players will get a chance to get them)
Time Paradox

You can see what you can win by tapping rewards then scrolling through the prize boxes. If something is greyed out, such as Ape Peter below, it means you already have it.

It’s really a lucky dip and unfortunately materials can be rewarded multiple times. It’s a bit like the mystery boxes that way I’m afraid.

Where Can I See My Reward?

You’ll get a pop up showing you’re reward, if it’s a successful jump, you’ll see this.

The prize will then be added to your Time Travel current rewards. These will keep adding until you “Take Rewards” but be mindful if you take your rewards you’ll be back to 0 of reaching the 50 you need to get the main prize.  You really want the rewards to accumulate but that comes with the risks of hitting a Time Paradox.

What Is A Time Paradox?

This is what you don’t want to see, basically when you choose your jump portal, the time paradox is the booby prize with an added sting in that it not only ends your run but will see you loose any rewards you’ve built up to that point. The only way to avoid this is to pay clams to keep those prizes and continue your run, or give your rewards up and start over.

I’ve seen costs of 25 Clams and 50 Clams to buy my way past a time paradox.

What Are Guaranteed Rewards?

These are jumps that will never contain a Time Paradox, basically the jump that will see you earn the 10th, 20th, 30th, 40th and 50th reward. But that’s all it means, if you hit a time paradox after that you’ll still lose everything, the guarantee doesn’t mean you’ve banked those rewards and can’t lose them, it also doesn’t mean you will return to your last granted reward level if you have to quit due to a time paradox.

How Do I Unlock The Top Prize Of The New And Exclusive Character?

Hope this helps answer some of your questions and prepares you for the feature once it’s fully launched.