With Rocky Times In Quahog underway there’s a new Big Boxer Boss to defeat, Ivan Drago. However now we’re in Phase 3 his rewards have changed a little so here’s the latest on the not so greatest.

For more information on the Event, go HERE

Ivan Drago appeared wandering your roads once you got to Pt. 2 of the Phase 2 main Questline, it was then you triggered the side Questline From Russia With Gloves.

The amounts you will need to defeat him at levels 1X through to 5X are as follows:

What you will get at each level is as follows, but bear in mind if you no longer need an item it obviously won’t drop.

Remember you will need 800 Russian Vitamins to buy Ivan Drago and 37 Boxing Shoes to help you unlock Boxer Lois.

The battle resource is Vodka and TinyCo have added a few more ways to get it.

The battle modus operandi is similar to that of previous boss battles, you’ll find Ivan Drago wandering your sideways with a timer above him. You have 24 hours to defeat him through his 1X to 5X Levels before he goes into a cool down/recovery. 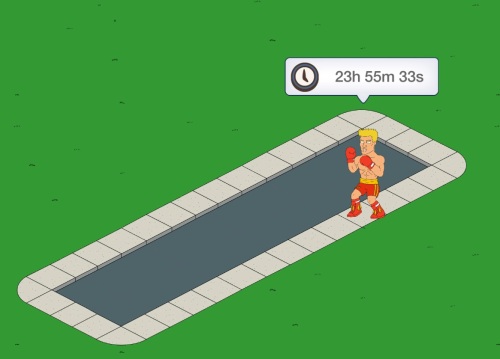 Once you have gathered the required Vodka, in the example below it is 1, the Fight button will appear. Simply tap it and then wait to collect your rewards.

Remember you only have 24hrs to hit him to the highest level before Ivan Drago will go “Recover” (cool down). When Ivan Drago returns, he will be back at 1x.  The “Recover” time appears to be 9 hours, and the clam cost to speed up his recovery will vary depending on what Level he was at when he timed out.

And there you have it the all the info about Ivan Drago and his Phase 3 drops. How are you getting on fighting the mighty Russian. Are you winning the bouts or will you be needing some recovery yourself before the next round? Got any battle strategies to share with your fellow addicts? And are you enjoying the event so far? Tell us in the comments as you know we lone hearing from you.