Before I start I want to repeat what I’ve said previously, Season Pass is still in testing, and part of that testing is releasing versions of it to random players to see and play with it in their games.

What those who have the feature currently see may be different to what I see due to testing. 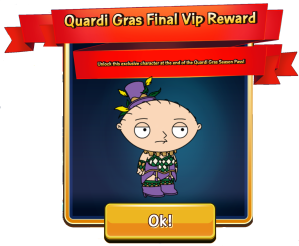 I’m not putting this up as a teaser or as a feature overview, and it’s not a quick look at the feature as I did that in another post you can see that by clicking the link below. I’m really putting this up to answer couple of questions I’m seeing in the comments, and to stop those who don’t have the feature knowing why they don’t see it.

What is Season Pass?

This is the feature that has been teased for months and is still getting tested before being rolled out to all players soon.

It’s really an additional rewards track that will appear in our games, probably running in conjunction with events.

It will let you collect Season Pass event XP, (so for this event it’s Beads), to unlock items in a reward track.

How will I know if I’m one of the test games for Season Pass?

You’ll see the above pop up in your game.

How do I enter the Season Pass area?

You’ll see the Season Pass button at the bottom of your screen along with a timer, this timer should match the event timer.

Tap the button and you can see the Season Pass screen.

What is the Quardi Gras Season Pass?

At the moment there is a variety of rewards from coins (groan) to clams, from decorations to a character/costume (still confirming this), what you can get depends whether you are playing FREE or VIP.

Basically it says you collect XP in the reward track but if you read the box above it’s actually collecting the events main currency that increases your Season Pass XP and moves you along the track. So for this Season Pass read XP as meaning Beads.

Also the XP is culmative, you don’t loss any XP gathered when you collect a Tier reward.

So to answer the questions I’ve seen today the XP is Beads and yes it’s culmative.

How do I get a VIP Season Pass? 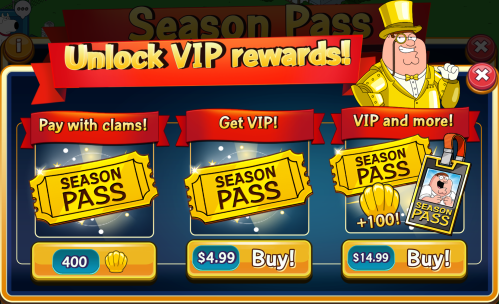 Now this is the other question I’m being asked, and it’s harder to answer, but basically there’s 3 options, unlock the VIP Season Pass tiers with Clams, with your hard earned cash or there’s the option for VIP and more.

What is the exclusive VIP reward?

In this test of Season Pass the “exclusive” reward is Dancer Stewie, I’m still trying find out if it’s a character or costume so will let you know soon.

When will Season Pass be fully rolled out?

If testing goes well, it should be fully released soon, I hoped everyone might get it this event.

Hope this helps answer some of your questions!!! Enjoy the new feature if you have it.