Where The Hell…? Halloween Costumes, Items, Decorations, and MORE!!

In this post, I will be covering the Origin of all these Halloween Costumes, Item, Decorations, and more. Why are they in our game? Where did he show up in the Family Guy Series? What on earth are these two girls trying to prove? Let’s take a look at the TV Episodes to find out.

Season 9, Episode 4: Halloween on Spooner Street
It is Halloween in Quahog and from the start, you can see the Halloween Decorations on the Griffins House.

We find Stewie coloring in his room but distracted by all the noises outside. He is confused by all the costumes and tries to kill the attacking ghouls, ghosts, and…hey…Trick or Treater Devil and Witches? Brian comes in to stop him and explain what Halloween is. 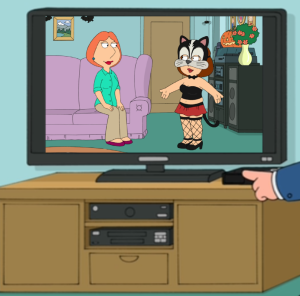 Following shortly after Meg leaves, we see  Stewie come down the stairs. “Quack Quaaaaack”. Looks like Brian has convinced him to take up the Halloween tradition. Lois loves his Duck costume, but Stewie is quick to point out the Vampire bite on his neck. He is a Vampire Duck. He goes on to explain True Blood, but Brian points out no one gets it. Lol.

While Stewie is out Trick or Treating, Brian temporarily leaves him alone. Bigger kid bullies show up and take Stewie’s candy. Brian goes with him to try and get it back. When Brian confronts the kids, they tell him the candy is around the corner. But instead they end up tricking Brian and spray paint him Pink. 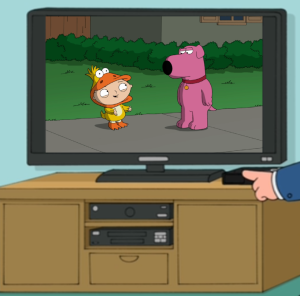 Meanwhile at the Halloween High School Party, a game of spin the bottle in in full swing with Sexy Witch Connie running the show.

Meanwhile Quagmire, Peter, and Joe are hanging out at an old Military Air Force Graveyard after Joe gets off work. Quagmire points out an old airplane that his grandfather used to fly in World War II (Quagmire is part Japanese…or is he?). A Japanese Zero. They end up taking it out for a joy ride.

In the end Stewie cries for his Mommy and gets his candy back. Hey…some of those candies look familiar. 🙂 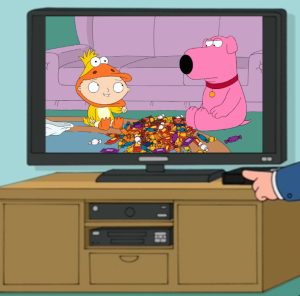 In the span of an episode about Halloween, you get to see where a lot of items came from (we also see a bit of Cop Joe and Mort hiding like a turtle in this one). What do YOU think of them? Are you glad they decided to bring them in to the game? Got any favorite tasks? Witch girl is YOUR favorite, LOL? SHUT UP MEG! Let us know your thoughts in the comments below.

22 responses to “Where The Hell…? Halloween Costumes, Items, Decorations, and MORE!!”