It’s beginning to look a lot like MORE Christmas. Raid to the North Pole Phase 2 is now live in our games. This means more Characters, Buildings, Decorations, and just a lil bit of snow.

With this new Christmas Event, we also get some new Character’s Costumes. Like Christmas Camo Peter! 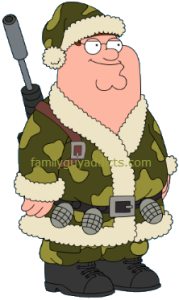 Let’s take a look at what Christmas Camo Peter can do in our silly lil games.

Christmas Camo Peter is a New Character Costume added during the first week of Raid to the North Pole 2015. As with many costumes in the game in order to get him you have to collect lots of stuff! After Raid to the North Pole Part 5, players are prompted to create the Christmas Camo Peter outfit by the Reporting for Duty questline. You can find him in the Menu, but tapping on Create will just take you to Al’s where he can be made.

Either location will tell you the items that Christmas Camo Peter’s Costume will require.

Once you have finished collecting all the Materials for his Costume requires, it will just take you 10 seconds to finish up and “CREATE!” the Costume in Al’s. When the timer is up, just tap on the Check Mark above Al’s to pull Christmas Camo Peter into your game.

He does come with a Questline, Santa Wants YOU!, more on that in another post.

Christmas Camo Peter does come with a complete set of Tasks! Tasks that will help you earn $$$ & XP. He also has “Alternate Tasks” to help earn various items in the Humma and Blocko Hovercraft Battles.

Let’s take a look at some of Christmas Camo Peter’s Tasks: 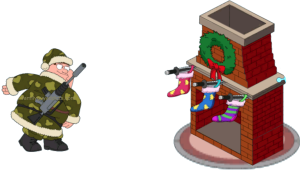 WHERE IS THE BASE TENT?

During the Event Only, there will be a main location in North Pole that Character Tasks will be performed at. These will most likely change after the Event is over to a separate location in Quahog, or the task my disappear. We won’t know until the Event Ends.

For now, when you enter the North Pole you will see the main camp area with Santa’s Supply Depot and Santa’s Headquarters. There is a small Tent next to Al’s. This is the “Base Tent”.

And there you have it, the complete breakdown for Christmas Camo Peter!