Here’s the costs and unlock times for all the Land Blocks in Desertland.

***Please note you will not see Desertland if you have Nightland***

Here’s the costs and unlock times for all the Land Blocks in Nightland.

***Please note you will not see Nightland if you have Desertland***

Here’s the costs and unlock times for all the Land Blocks in Winterland.

***Please note some players can unlock with coins, others need to collect materials*** 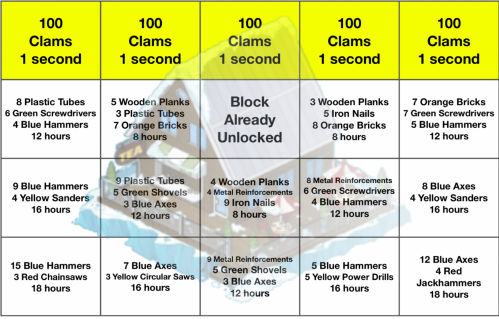 Here’s the costs and unlock times for all the Land Blocks in Grassland.

I put this warning in a few posts but now the feature’s going live I’m putting up a post. Basically it’s just to warn you that some land blocks in the new lands are unlocked with Clams only and it’s very easy to do it be mistake.

END_OF_DOCUMENT_TOKEN_TO_BE_REPLACED

I put this warning in the Alternate Quahogs Addicts Area post but wanted to put it up again so you all see it.

This new feature is current,y being tested in some Android players games, but even if you don’t have the feature fully activated in your game via the new Questline you may still see the Alternate Reality Portal available to buy in your game for 10,000 coins. Don’t buy it if you also plan to play on an IOS device as once you do so your IOS game won’t load. So hold off buying this until the feature is fully activated and the Questline directs you to buy it, ok!!!

I wanted to put up a place for suggestions and feedback on Alternate Quahogs.

END_OF_DOCUMENT_TOKEN_TO_BE_REPLACED

I wanted to put up a place for questions, concerns, comments, suggestions, and all your feedback on Quahog Historical Society. 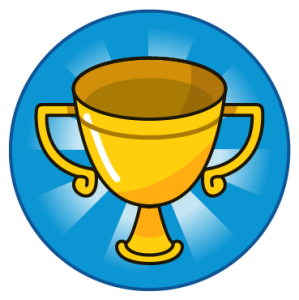 END_OF_DOCUMENT_TOKEN_TO_BE_REPLACED

Tan Lines Live For All!!!

A New District is now live for ALL PLAYERS!! TAN LINES ISLAND RESORT.

This New District will utilize some Characters you may just have hanging out in Inventory Storage to earn some New District Currency and Cool Prizes. Make sure you’re on App Version 1.21.0 & to at LEAST District 8 to see this New District.

I wanted to put up a place for those that are testing out the New District. The main purpose of this post is to give you somewhere to go to leave your main questions, concerns, suggestions, issues, etc for Tan Lines while you play and progress through it all.