As we’re nearing the end of the Tea Party Event many of you are asking, just when will it end?  More or less you guys want to know if this is it, or if you’ll get another shot at the prizes tomorrow (Tuesday).  Hopefully I can clear up some confusion for you all about the end time….. 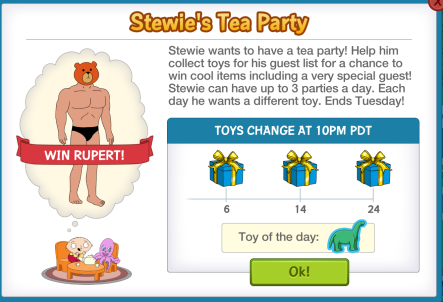 The Toys change everyday at 10pm PDT (for those that don’t know that’s Pacific Time in the US).  10pm PDT is GMT -7hrs.  So, for anyone from the Central time zone in the US all the way to New Zealand, it’s a new day when the toys change.  However, for the game itself it’s still the previous day….

With me so far?

As far as the official end time…TinyCo has CONFIRMED to Addicts that the end time will be 10pm PDT tomorrow 7/22.  So you will get a full 24hrs to complete the last day once the toy changes tonight.

So for anyone completely lost in the above post…let’s recap:

-The toy will change tonight at 10pm PDT (1am EDT/ 0500GMT)
-You should have 24hrs left once it changes to earn toys before it ends, but waiting for TinyCo to confirm that.

And finally…Just a quick tip for toy collecting:

This also works if you’ve completed the turns for the day.  Set your characters on the 4 hr task and don’t clear it until after the toy resets.  It should generate you a quick 4 toys and help you get ahead for the last day!

That’s it my friends!  Here’s hoping we ALL find Rupert before the event ends!

What do YOU think of the last day of the event?  Any toy collecting strategies you’ve found to work?  What have you won so far?  Sound off in the comments below, you know we LOVE hearing from you!