Where The Hell…? Santa’s Village, Elves, and MORE!! 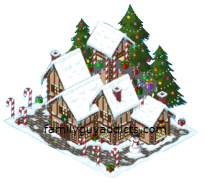 In this post, I will be covering the Origin of Santa’s Village, Demented Mutant Elves, and the North Pole Sign. The shrine that the Jolly Ol’ Fat Man sits upon. When did it appear in the series? Was it ever used? Anything significant about it? Let’s take a look at the TV Episodes to find out just where.

Season 9, Episode 7: Road to North Pole (Part 1 & 2)
As the opening credits are rolling through for the first part of this episode, we see Nutcracker versions of Brian and Stewie along with the Large one in the background. A little more into them we see the Snowman Rupert that Stewie has made.

Then the pile of Snowballs that Brian made that are no match for Stewie’s giant Snowball Catapult.

Just as we start the episode, we can see a hearth and a fire behind Seth’s Dad that resembles a familiar one in the game. (Chestnut Roaster.) Then on to the show, the scene opens on Quahog and zooms in to the Griffin’s house, complete with Christmas Decorations outside. This is an earlier version of the one in our game, but the actual one in the game comes in a lil later episode.

The Griffin’s are inside making their lists for Santa. To a tune of course. Chris wants a pair of skates to go ice skating on a pond. Too bad he doesn’t know how to skate. Meg wants a Lexus all in Pink. And a Dad that doesn’t stink. Lol 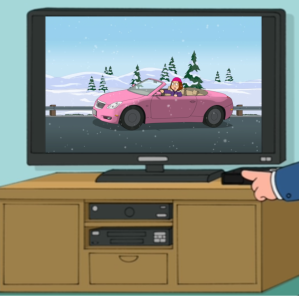 There are lots of decorations and items throughout the song and dance including Quagmire on his Bondage Rack with the Asian Girl, Poinsettia’s at Joe’s, Piles of gifts, Menorah picture at Mort’s, etc.

Later on after the song and dance routine, we see Stewie and Brian at Quahog Mall, as a “Nice” Mall Walker goes by. Then a little bit later as they try to make their way to Quagmire in the massive line for Santa, we can see both the “Naughty” & “Nice” Mall Walkers in line in front of and behind Quagmire and his Niece. You can also see lots of Christmas Cookies hanging in the background. You can also see the version of Santa’s Throne that is in our game. 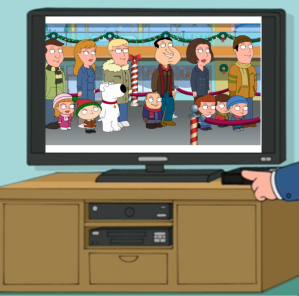 Finally Stewie makes it to Santa after hours and hours of waiting. Of course just as he is about to go sit on his lap, Santa checks out for the day and leaves. Stewie is not happy. Later as the family is decorating the tree, Stewie announces to Brian that he needs to go to the North Pole.

Stewie falls asleep in Brian’s car while they are heading to what Stewie thinks is the North Pole, but is actually Burrillville, Rhode Island. Home of Santa’s Village and Gift Shop. Stewie wakes up and runs inside thinking he really is there. At this point we can see the North Pole sign in our games as Stewie enters Santa’s Village.

Stewie starts to realize really quickly that this is NOT the North Pole or Santa’s real Village. (Another shot of the Naughty Mall Walker in the Ferris Wheel.) Stewie goes mad on Brian and threatens him for trying to mislead him. Brian tells him to stop freaking out, he will just mail Santa his wish list. Stewie tells Brian it is not about the gifts, he is going to kill Santa for blowing him off.

Brian tries to again divert Stewie from his plans, but it doesn’t work. Stewie hitches a ride from a Semi and Brian has no choice but to follow…until it wrecks in a mass car pile up in Canada, thanks to Stewie firing off a flare gun in the cabin. Finally Brian had enough and tells Stewie Santa isn’t real. Stewie makes a bet with Brian to trade one of his feedings if he goes with him to the North Pole to prove he is or isn’t real.

After a long journey, and help from the Aurora Boreanus…they are able to find shelter for the night after their snowmobile ran out of gas. The next morning they finally make it to the North Pole, but it is not what they expected. Santa is looking really worn down and sickly. He begs for Stewie to kill him. Santa explains life was fine when kids asked for only one gift. A simple gift. However now kids ask for many things, complicated things, like electronics and it has caused the place to fall to pieces. The place is full of Toxic Waste from the production. To keep up with production, Santa needed more and more Elves…thus began the inbreeding with the results…the Mutant Demented Elves. 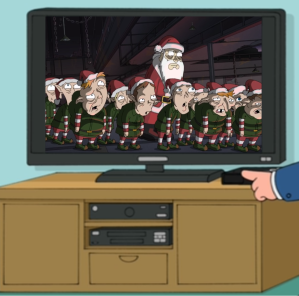 The workload has destroyed them. When they are worn out, they just wander out into the snow…to be eaten by the Reindeer who have also gone mad and now lust for Elf flesh. On to another song and dance from Santa and the Elves, “Christmas Time is Killing Us!”

Santa ends up collapsing so Stewie and Brian end up trying to deliver the presents for him, but fail miserably after taking the family’s house they broke into hostage. Christmas just goes really really wrong. As the world learns that no gifts were delivered and the New reports on how Santa failed, Brian wheels out the sickly Santa and pleads with everyone to change their ways. Help Santa out and only ask for one gift.

One year later and Santa’s Village is looking a whole lot better.

The Elves are looking more…normal. Santa is nice and plump again. Everyone is getting their one gift…hey…wait a minute…WHO GAVE CHRIS A BUNNY??!!! NOOOOOOOOOOOO!!!! DON’T SQUISH THE BUNNY CHRIS!!!

I much prefer THIS Chris squishing Bunny pairing. Lol.

This entry was posted in Where The HELL Did That Come From and tagged Family Guy Addicts The Quest For Stuff, Family Guy Tips and Tricks, Miracle on Spooner Street, Mutant Demented Elves, Naughty and Nice Procrastinators, North Pole, Santa's Throne, Snowman Rupert. Bookmark the permalink.