As we tap away in our own lil Quahog that we created either since last year to even recently, we like to reflect on just WHERE all this content is coming from. The Amazing Family Guy Episodes that are released weekly for our viewing pleasure.

There are so many things going on each Episode that we may not have caught them, overlooked them, or may have giggled right along with everyone else. So for a look at what we just saw on TV … or for our Out Of USA Neighbors, a look at things to come for you.

I GIVE YOU THE FAMILY GUY EPISODE RECAP OF…

Note From Bunny: This post was brought to you by the generous help of one of our very own Addicts Readers Mellie! Thanks!!

~The Griffin’s are at Smitty’s Steakhouse for d inner. Sitting around the table Peter is reminiscing about the restaurant, “It was /the fanciest restaurant in Quahog when I was a kid.” When ordering their food Peter orders pheasant on the glass, the waiter corrects him “you mean pheasant under glass”.  Peter says nope and we then see him sitting looking at a pheasant in a peep show way.  Leaving the restaurant Peter gets a toothpick. He goes to put it in his mouth; with his mouth wide open, Lois tells him that you pick your teeth with it; she has to tell him everything.  Peter gets excited about using the toothpick; he says from now on he’s all about the toothpick and saying ‘here’s watcha going to do’.

~ Peter is telling Chris that now that he is a toothpick guy he has to stand outside the rec center with a BMX bike and ask every kid if their the new kid. Peter outside the rec center talking to a kid, and he kinda freaks the kid out. Back at the house Peter, with the toothpick still in his mouth and an apron on, tells Meg that he is going to the fish market to make people feel uncomfortable for not knowing about fish. At the fish market Peter is talking to a costumer; the costumer asks “what’s your favorite fish”. Peter tells him that he doesn’t like fish he likes spaghetti.

~In the car Lois tells Peter to get rid of that tooth pick that it’s disgusting and it stinks. Peter wants to know why that it gets him lots of tail, he then flips the toothpick and he swallows it.  Peter wants another toothpick so instead of going to the hospital to be with Chris when he wakes from surgery they go to the restaurant. At the hospital Chris wakes up, the doctor tells him that they have fixed his hernia but he has to stop lifting sewer covers. Chris tells the doctor that the ninja turtles live down there and he is their friend. In walks a man with flowers for Chris and tells him to stay out of the sewers that they are trying to work. Thanks Donatello, Chris says sitting up in bed.

~ At the restaurant Peter goes to get a new toothpick. A little old lady is at the counter, and she has gotten a toothpick and goes to pick her teeth and it grosses Peter out and now he doesn’t want one. They see Quagmire and his mother Ida. They go over and end up joining them for dinner. They are all sitting around telling stories and having fun.  Quagmire has that look when looking at Lois; he tells her that he could listen to her all night. Ida wishes the night didn’t have to end, and Lois says come over tomorrow we’ll cookout. Everyone takes a selfie then Peter and Lois leave. Quagmire zooms in the picture to just Lois, Ida realizes that Quagmire has feelings for Lois. Quagmire tells how he wants Lois, he has been in love with her for a long time; but he knows it’s wrong; Peter is his good friend unlike Cleveland. We flash to Cleveland hinting around to wanting to borrow money from Quagmire to buy a man fur. When Quagmire says no Cleveland goes to Peter who also says no. Peter and Lois get home and Peter sees that he has some new messages. One is from Stewie telling him that grandpa is going nuts on the stove and to come home now. The other is from Quagmire; who accidentally pocket dialed Peter, and Peter hears everything Quagmire said about Lois. Peter is shocked that Quagmire is in love with his wife.

~At the Griffin house, Peter is talking to Brian about Quagmire pocket dialing him.  Brian listens to the message and is like ‘oh my God Quagmire is in love with Lois’.  Peter asks Brian if he can believe it. Brian tells him that it’s not shocking that Quagmire does say how wants to bang Lois. Peter says that’s just Quagmire being a horndog, buts this is love. Brian thinks he is making too big of a deal of it. Peter says this guy has been sitting beside me as my friend and all he wants is my wife. Brian tells Peter to calm down, but Peter thinks Quagmire is going to try to take Lois from him and he is not having it. He’s going to Quagmire now to ‘hit him with a shovel like a white trash you tube girl’. Brian stops him and tells him to delete the message and pretend that he didn’t hear it because he wasn’t meant to hear it and he could ruin his friendship with Quagmire. Peter wants to know if he is just suppose to ignore it and Brian says yes just like you do with the ghost of that colonial lady that died falling down our stairs. Brian tells Peter he has to be the bigger man and not say anything. Peter agrees.

~At the cookout, Peter is grilling the burgers and Quagmire and his mom show up. Peter tells Brian that Quagmire has some nerve showing up. Brian is like remember what we talked about. Lois was glad to see Quagmire and Ida show up, Quagmire brought some buns, saying some with seeds some without, and this upsets Peter; thinking Quagmire is talking about semen on her buns. He tells Quagmire to leave his wife alone. Lois wants to know why, and Peter plays the message. Quagmire didn’t know he had pocket dialed Peter. They started pushing each other, then comes the punches, they get pulled apart. Peter kicks everyone out and tells Quagmire to never speak to him again, cookout is over.

~As Lois gets into bed Peter is listening to the message again. Lois says she can’t believe he feel this way, then ask Peter to play it again. Peter can’t get over that it is his friend. Lois then says that Quagmire has always had a potent sex life. Peter says ‘this isn’t about sex, Quagmire has feelings for you and I’m afraid he’ll take you from me’. Lois tells him no one is taking her from him. Lois says now that its settled maybe they can make up Peter is like ‘no how can I be friends with someone that’s in love with my wife’. Peter tells her that Quagmire is dead to him.

~ At the Stop-N-Shop, Lois sees Quagmire; he tries to hide but she sees him.  Lois says they should talk it out even if he and Peter aren’t.  Quagmire says that there is nothing to talk about everyone knows, and that he can’t trust himself around her and the best thing is to never see her again. Lois tells him that he can’t avoid her forever they live on the same street.  Quagmire says to her he now knows what he has to do, “Goodbye Lois”, and Quagmire walks away.

~Quagmire is packing a moving truck to leave. Joe wants him to stay and give it some time to blow over.  Quagmire decides to go anyway because it’s awkward. Cleveland tells Peter that he has to do something about Quagmire leaving and Peter yells at Quagmire and tells him he forgot something and when Quagmire turns around to look Peter give obscenity with finger. Quagmire leaves. 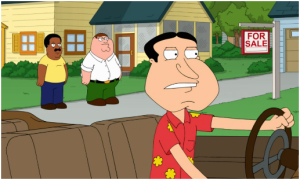 ~At the Drunken Clam the fellows, minus Quagmire, are sitting around talking trying to fill the gap that is left with Quagmire not being there. Joe says they need Quagmire without him they are boring. Peter doesn’t think so. Peter is sitting around drinking he blames Lois for Quagmire falling in love with her. Lois tells Peter to get in the car they’re going to fix this now.  Cleveland and Joe are at Quagmire’s new apartment, Lois shows up with Peter. Lois tells them that this has to end now; it’s only a problem because Peter heard something he wasn’t supposed to, and that everyone has secret thoughts they don’t act on and these thoughts shouldn’t ruin friendships. She then says that the secret to a happy life is to hide your true feelings and compromise. Lois then asks Quagmire does he love Peter enough to hide his feelings for her. Quagmire asks Peter to forgive him, and Peter does. They are all back together at the Drunken Clam.

And that’s it. Hope y’all enjoy

There you have it. Addicts Helpers to the rescue!!

What did you think of the Episode? Any favorite moments? Thoughts? Let us know.