Just when you thought it was safe to go back in your games, the Leaderboard is back. Quick prep your Neuroalyzers!!!

Yes with the new  Guys In Black event now well underway, TinyCo have decided to dangle some leaderboard prizes as bait for us Addicts and I thought I’d bring you a quick guide to the  Leaderboard and ask you if you wantto make them a bit more fun.

It’s not been that long since we saw a Leaderboard, in fact we only need think back to the Mighty Morphin Griffin Rangers event. And it was good to see the early anger towards the Leaderboard in earlier events had vastly reduced as like the Mystery a Boxes, we just don’t take them too seriously now.

The latest leaderboard is similar to those we’ve seen previously, in that it sets up a side contest between players for a limited amount of prizes. Now I usually take part, but only through my normal gameplay. I WILL NOT spend a ton of clams just trying to hit the top rank, then spend loads more to stay in it. Wherever I end up is out of my hands so I just relax and play my normal game. I advise every other addict to do the same. And remember many of the Top Prizes have come back as returning prizes in Best of mystery boxes and such, so try not to stress this too much on what you might be missing.

Warning – you Read The following at your own risk as Russian Tigger’s had an idea – And that’s never a good thing!!!

Ok, yes I admit it, I’ve had a lightbulb moment, I’m allowed one a year, and I guess this must be it. I was thinking outwith the main in-game Leaderboard why don’t we have an Addicts Leaderboard. Admittedly there’s no prize I’m afraid, well apart from being able to boast you’re the Top Addict for a day, lol.

Now I’ve got your attention here’s what I was thinking, if at least, say 10 or more of you are up for it, I’d basically put up a post every Wednesday before the new Phase drops and another at the end of the event where you can give me your Leaderboard MIB Badge total, and I’ll rank us and post the results each week. This of course will be based on an honesty system, trusting that the figures given by players are true, and that you’re not playing an “altered” game. By this I mean any clams you spend in your game are either earned or bought. In return for your honesty I promise not to elevate myself to the top spot just because I can. So if you fancy having a little fun rather than the usual Leaderboard grumbles then comment below that you want to take part in the Addict Leaderboard, and the Leaderboard name you’d like to be known as, please just keep ithr name peachy and PG.

So whether this happens or not is in your hands guys, if you want it to happen let me know in the comments. And if it’s a go, I’ll pop up a post on Wednesday asking for your scores. And if you don’t want it to happen well I’ll just declare myself the winner and you’ll never hear the end it, lol.

So with my thought of the year out the way, let’s get back to the official Leaderboard, here’s everything you need to know.

Okay on to the leaderboard itself, there are 3 Ranks and 3 Prizes, 1 prize for each rank obviously. And usually  if you finish in say Rank 1, you also get the lower Rank prizes as well. 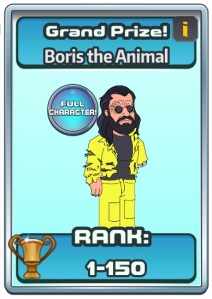 To be awarded this prize you will need to ranked in the top 150 players in the FGQFS universe.  Good luck with that!!!

To be awarded this prize you will need to be ranked between 151-500 in the FGQFS universe. This is the prize I want just incase anyone cares.

To be awarded this prize you will need to be ranked between 501-5000 in the FGQFS universe.

So that’s the prizes covered, and even though I fancy Jeff, not literally obviously, I’m not going to break my clam bank for him, I’ll just play as I always do and see where I end up. For those that choose to do chase a prize, I wish you all good luck.

Now finding the leaderboard is easy, you just click on the Leaderboard  icon at the bottom of your screen.

This will open up the leaderboard screen, here you will see 1: your current rank, 2: your total number of MIB Badges, 3: your potential prize, 4: where you’re sitting compared to other ranking players. 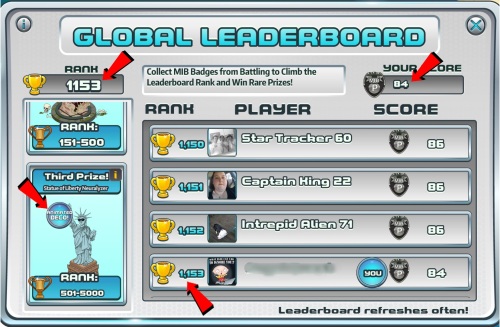 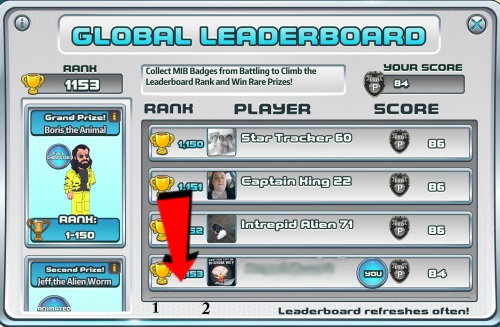 Collecting MIB Badges is as ever slow going, and as of now you can collect them from battling Ballchinians and Edgar The Bug.  However I’m sure more ways will appear as the event goes on.

The leaderboard will close on 30th August at 3pm Pacific (GMT-7). If you’ve qualified for a prize you will usually be awarded it/them about a week later.

And now my final thoughts, I know the leaderboard often makes you feel like a little fish in a big pond, but they are what they are my friends, and let’s try to keep it like it was during the Mighty Morphin Griffin Rangers event, i.e. nothing more than a bit of friendly rivalry. I know many of you dislike these type of individual Leaderboards and would prefer community prizes we can all work towards, I’m in full agreement with this, but as someone who previously had issues with the Leaderboard, I now just sit back and let my gameplay dictate where I end up, and that’s the best advice I can give you, don’t turn it into a battle, as honestly you can’t control the spending or the gameplay of others, so you really will find it difficult to plot a path to victory.  And remember when you look at the Number 1 Ranked player’s MIB Badge tally and think it’s outrageously high remember TinyCo do have ways of removing those who abuse the rules of the Leaderboard, so if someone has used unfair means to build up those MIB Badges they will be found out by TinyCo. On the other hand if you find yourself banned from the Leaderboard and feel this is wrong, unfortunately we can’t fix this for you, only TinyCo can do this, so message them and state your case.

Once again whether your play to win or just play to play, good luck and remember if you fancy taking part in the Addicts Leaderboard let me know in the comments.

There you have it, all the facts about the Leaderboard. What are your thoughts? Are you going to take part in it? If so, any thoughts on the Prizes? Any other tips for fellow Players? Let us know.

29 responses to “Guys In Black – Leaderboard”