Just a quick bounce by to remind you that later today Phase 3 will be hitting our games.

Approximately around/after 3PM Pacific Time is when it is assumed to launch. 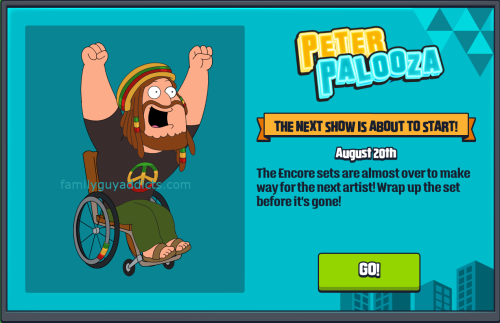 As a new Musician will be hitting the game, the Concert Stage will be taken over again. That is why you see the pop ups about Encores Ending. So get in what you can while you can. 😉

There is an Update in Google Play (1.11.2) with bug patches and Phase 3 prep, iOS out soon if not out already. You can still play though without it per TinyCo, but you will want to eventually update from the App Markets.

Watch the timers on your Festival Merch Kiosk Character Costumes for those that triggered them. Remember each one only has 7 days once you start those timers. (See image at bottom.)

I assume that you will need to have Festival Fail Questline complete as it is the Main one for Phase 2.

Otherwise, can’t wait to see what Phase 3 brings into our silly lil games. I will try to get all the details as fast as I can while I am out n about tonight. Who knows, we may even see Alissa bouncing around to help. Lol. 😉

Who do you think is next? Any Costume ideas for Characters? New Materials? Let us know.

FYI… for those panicking at the following Pop Up… it is OK. This is just TinyCo’s way of listening to YOU say you want more warnings on timed Characters. Many Players triggered Rapper Brian’s timer the day Phase 2 Launched so for them, the timer is about out. Think of this as more just a heads up “You have a timed Character, don’t let them run out“. Go off of how much time YOU have left in the Festival Merch Kiosk. If it says 4 days still, then you still have 4 days. 😉