It has been a while since we have seen a New District in our games, but TinyCo did not disappoint with this one. Ghosts, Spirits, and all things Macabre are now in our Quahogs. THE GRAVEYARD DISTRICT IS HERE!!

With a New District in the game, we were able to get some cool New Ghost Characters from the Lazarus Portal.  Characters like Paddy Tanniger.

Let’s take a look at what Paddy Tanniger can do in our silly lil games.

Paddy Tanniger was a New Character added during the first part of the Graveyard District (11) 2015. As with (almost) all Characters in TQFS in order to unlock him you’ll have to collect lots of STUFF.

You first had to take some chances in the Lazarus Portal until you “RESURRECT” him.

Once he was Resurrected, he appeared in front of the Lazarus Portal with the Lock Symbol over his head. Tapping on the Lock above Paddy Tanniger’s head showed you just what you needed to collect for him… 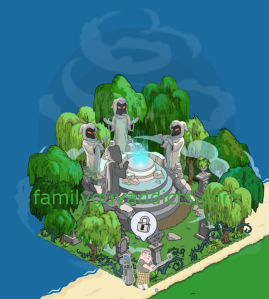 He does come with a Questline, Wanna Fight About It?, more about it in another post.

Paddy Tanniger does come with a complete set of Tasks! Tasks that will help you earn $$$ & XP.

Let’s take a look at some of Paddy Tanniger’s Tasks:

He is not Currently voiced just yet, but his voice is coming. Will Update when it becomes available.
Here is one of his Phrases (more may still be coming)…
“Big Woof, wanna fight about it?”

And there you have it my friends, the complete breakdown for Paddy Tanniger!