UPDATE 12/22:  Per TinyCo… “The 1.5.5 update for Android is out! It may take a few hours to appear in your store. Once you update, you’ll be able to visit neighbors as normal – and you can tap those pesky Procrastinators, stunning them with your mighty finger.” Also, for those of you having the “Event Ending Prematurely” issue, this should help resolve it. If you still are experiencing it, please email them right away at help@tinyco.com

UPDATE: I have been going back and forth with TinyCo on these issues. They are fully aware of all the different things going on causing the Pop Up. They are working on way to help fix it. Hang in there.

ADDITIONAL UPDATE: For those of you rounding the Profits vs Prophets Part 10, there IS a wording glitch in the dialog. It states to hit Cheer Level 6 and to Upgrade to the Jolly Christmas Tree…however what it SHOULD say is the Festive Christmas Tree, which will be the next Tree Level released. So essentially all players will stop at this point until the Next Tree is released. 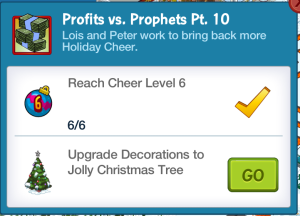 Bouncing by with some details and info to help out with an issue we see spreading to players. “Upgrade/Update Game”.

So there are a few things going on and I just want to clarify what is NORMAL to see and what may be an issue.

A patch did hit iOS users for their game. Due to this, players on alternate devices may be impacted in the following ways…

1: If you have Neighbors via Facebook that are on iOS, you will not be able to visit them as they have a newer version of the game. Instead you will see the message telling YOU to update in order to be able to see them. For now, you will have to pass them by.

2: If YOU are on iOS and got the patch, you will not be able to visit players on alternate devices as YOU are on a different version of the game. You will have to pass them by until they get the update too.

3: If you play on BOTH iOS and an alternate device, your iOS may have updated while you were in the game. If this is the case, you will not be able to play on any other device until they get the update too as your game already recognizes the newer version of it. So you will have to stick with iOS until then.

Now for those that may be having a glitch. If you do NOT have iOS, do NOT play on multiple devices, and ONLY have Android…if you see the message to Update to continue playing…TinyCo needs to know about it.

So if NONE of the 3 circumstances above apply to you, but you are still being told to Update, contact TinyCo ASAP. Let them know the following…

When did the issue start?

Does is show up on the launch screen or once you go into the game?

Did you start to get this message AFTER seeing it in a Neighbors town?

Can you play at all?

Send the details through your in game messaging (Menu, Help, Contact). If you are not able to get in the game, send them the message via email at help@tinyco.com.

Also, please post the issue here so we can help track it. Just answer the 4 questions above. Hopefully this will help track down those actually having a glitch vs those just experiencing the pop up but need to just wait.