Shiver me timbers; we’d best hoist the main sail and set course for home as Blackbeard has appeared in our seas, and it would appear he’s changed sides and will drop the resources we need to keep defeating his fleet. Guess it’s true what they say; never trust a pirate.

With tasks for drops of Grog, Whiskey, Bourbon and Champagne, he looks like the premium character we’ve been waiting for, just a shame he didn’t choose to join us sooner.  But now he’s here, let’s take a look at what Blackbeard can do in our silly lil games.

Blackbeard is a New Premium Character added during the fourth week of Peter’s Booty Haul 2016. His cost is 270

clams. As with all Premiums, it is your choice to determine whether or not he is someone you want to add to your game.

He does come with a questline, Fear the Beard, more on that in a later post. 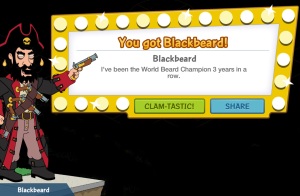 Blackbeard does come with a complete set of Tasks! Tasks that will help you earn $$$ & XP.  He also has a set of 4hr tasks which always drop stuff for ALL the boat battles!

Let’s take a look at some of Blackbeard’s Tasks:

No, he is not currently voiced.

And there you have it, the complete breakdown for Blackbeard!