UPDATE: Per TinyCo in regards to Jillian’s voice…

We uploaded new sounds for Jillian, so it may take devices a bit more time to fully download. Please advise players to keep their devices running for a bit to download the new audio files to get her talkin’ again!

So for those of you that continue to NOT be able to hear her… let your game play through for a few minutes and then try tapping on her again to see if the sound fully loads. (You see this at times with other items like buildings just showing a blank spot or gears, some just take a bit to complete loading. Memory thing.) Either way, if this still does not seem to help, please let us know.

TinyCo has released the long awaited 1.6 Update many of you were waiting for. There will be a LOT of fixes in it, so hang tight while we go through them all.

First off to see all the changes, make sure you go to your app market and download the newest version of the game (1.6). So far this is on iOS and Android, Amazon is coming soon.

Now let’s take a look at some of the changes you may notice in your game. These were some of the main ones impacting the game.

CHARACTERS WON’T UNLOCK
Many of you had issues with being able to tap on your Characters to unlock them and it would crash the game. You should be able to try now to see if this issue is resolved in your game and you can unlock the Character(s).

SOUND ISSUES
Many players had issues with the sounds of the game. This update was working to help fix that issue, so check to see if your sound is back to normal. See if your Characters are talking again (those that had voices).

SCROLLING & “GO” IN BREWERY
The issue of being able to scroll through what Characters earn what items along with the option to tap “GO” should now be restored to the Pawtucket Brewery. 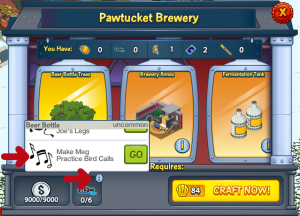 OUTDOOR TASKS TAGGED
Now for a cool new feature that you may be starting to notice in your games. As you scroll on through your Characters Tasks, you will now see an icon next to the tasks that are outdoors. So if you wondered what tasks took place where, this will be a great help to you. Just look for the Movie Scene Marker.

A few side notes, Patches was not playing nice with the games when it came to the videos… so he had to be taken back to the Jurassic Park. 😦

Also, the Creepy River Boat will now be known as the Brewery Annex.

Your Splash Screen and Game Icon will switch back to the standard ones. This is also going to prep for some future things to come.

So there are a few of the big changes you will now notice in your game with the 1.6 Updated Version. Does this Update help you out? Able to move on from where the locked Character had you stuck? Like the Movie Screen Marker feature? Let us know.