With the introduction of Family Guy: The Quest For Stuff there’s a whole cast of characters to unlock in your rebuild effort of Quahog!  These overview posts are designed to give you a quick breakdown of the characters, how you unlock them & their tasks so you can play TQFS more efficiently!

Of course there will be those players who don’t want to know the details of unlocking the characters so for that reason we’ll post all of the details below the fold.  So if you don’t like to know what’s going on before you play don’t click read more…CAUTION SPOILERS AHEAD

In this edition we’re going to talk about a character that’s been in the game since it’s start, Brian Griffin.  Brian is one of the two characters you’ll unlock in the Civic Center District.  He’s also the only character that can clear the Bulls out of your game.  So now let’s take a look at Brian and his tasks…. 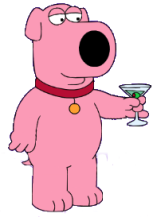 So there you have it, the break down of Brian and his tasks in FGTQFS! What do YOU think of Brian’s tasks?  Any costumes you don’t have?  Any you’d like to see?  Sound off in the comments below, you know we love hearing from you!